Today I`m takin` it back to 1985 for all y`all `80's babies......LoL, what I`m sharing with y`all this time around is the soundtrack to the film "Krush Groove". Now for those of you that aren`t familiar with the film it`s a story loosely based on the start of the Def Jam record label.....except in the movie the label`s called Krush Groove instead.....LoL, many early Hip Hop artists star in the flick. You get to see a very young LL Cool J, Kurtis Blow, Run DMC, the Fat Boys & even the Beastie Boys to name a few. The plot goes a lil` somethin` like this; manager on the come up Russell Walker has some great artists on his label Krush Groove, Rick (Rubin) handles the production for their records. Run DMC ends up with a BiG hit record, but Russell is a lil` short on ends to press up the records so he hits up a local street hustler for a loan to get things for his label off the ground...

As an added bonus to the film`s plot they add a lil` love story to it by having both Russell & his brother Run (from Run DMC) competiting for singer Sheila E`s heart....awwwwww how sweet.....LoL, Sure the movie may seem kind of corny by today`s standards, but when you really look at it this joint came out years before Eminem`s flick "8 Mile" or even 50 Cent`s "Get Rich Or Die Tryin`" & these movies were loosely based on their story. So you can almost say that "Krush Groove" is sort of like the foundation for this type of Hip Hop film, which is kind of DoPe. Enough about the movie though, let`s talk about the soundtrack now shall we???

It`s kind of short in length clocking in at just over 45 minutes with only 10 tracks, but it`s most certainly worth a listen with it`s nice mix of Hip Hop, R&B, Funk/ Soul, Synth-Pop & Electronic music vibes. Standout cuts for me include LL Cool J`s "I Can`t Live Without My Radio", Kurtis Blow`s "If I Ruled The World"....a joint that would later go on to influence Nas years later in 1996 for his duo with Lauryn Hill. The Fat Boy`s "All You Can Eat" is another great song, it`s also one that comes to my mind for some reason whenever I walk into a Chinese buffet.....LoL, gotta love them kats (R.I.P. Buffy)...

Sheila E`s "Holly Rock" is also a pretty catchy tune that I`m pretty sure will have some folks singing along to the hook. "Krush Groovin`", the final song on the soundtrack is probably the DoPeST of the bunch - a collabo` joint featuring Kurtis Blow, Run DMC, The Fat Boys & even Sheila E. So there ya have it a lil` run down of the soundtrack for ya, if you`re an `80's baby I`m sure this will hold your interest for 3 quarters of an hour anyway . So go` head & check it out & even if you`re not from the `80's it`s definitely an intersting listen... 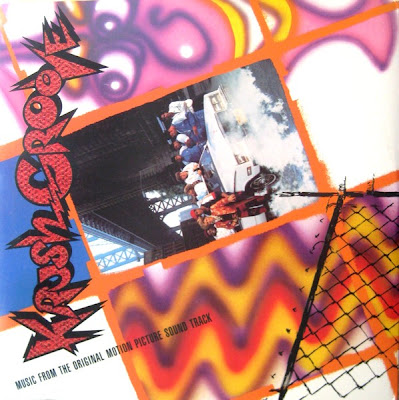 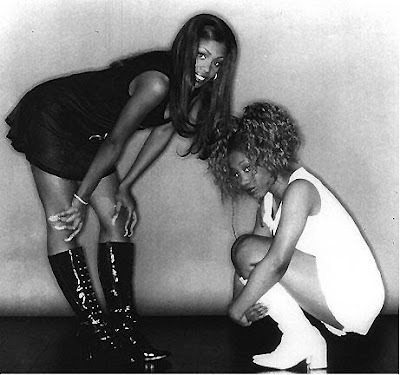 Been on a lil` bit of a Bass Music kick for about a week now. Gotta be honest though, when I was younger it really wasn`t my thing. Aside from 2 Live Crew I just couldn`t get into it & I think it was just their X-rated rhymes that caught my attention back then.....LoL, so lately I have been listening to a few more artists from the Bass scene to give the genre another shot. So with this post I`m gon` take it back to the 1-9-9-4 with an album from Dis `N` Dat titled "Bumpin`". At the first glance of the album cover I thought that Dancehall queen Patra started a group.....LoL, bein` a sucker for them braids I decided that I had to borrow the album from my homie TaLL CaN ToMMy just so I could check out the music for myself & well share it with y`all...

Now I don`t know much about this female duo consisting of Tishea & Tenesia Bennett a.k.a. Shea-Shea & Nee-Nee. I believe that they`re sisters & they`re reppin` Atlanta, Georgia. They have a Hip Hop vibe to their music, but their sound`s more Bass or Booty Music oriented. The group was down with the 69 Boyz & 95 South as well as the Quad City DJ`s, some heavy hitters on the Bass scene around the early `90's. Dis `N` Dat`s affiliation with these crews is probably why Jay Ski & CC Lemonhead produced the entire album... 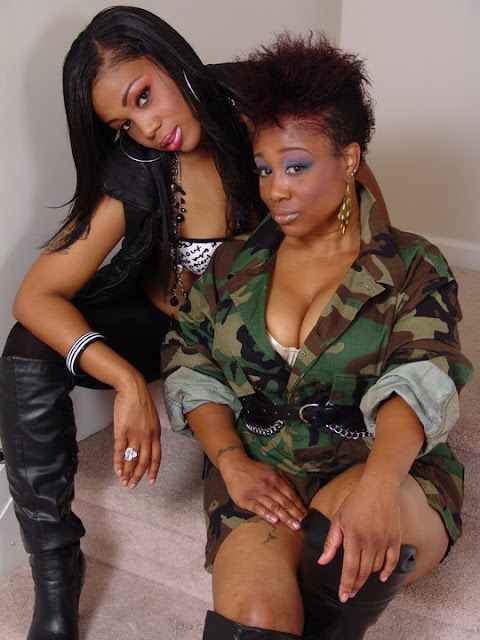 "Party" featuring the 69 Boyz kicks things off, it`s also one of the more popular songs off the album. Following the opening joint is "Whoot, Here It Is" which is apparently an answer back/ reply track to 95 South`s "Whoot, There It Is"....no not Tag Team`s "Whoomp, There It Is" though the hooks on the later 2 joints are very similar.....LoL, "Do Dat Thang" comes up next & is sure to get folks dancin` with it`s catchy beat. "Freak Me Baby" follows & continues the danceable vibe. Featuring the 69 Boyz, 95 South & K-Nock, it`s another joint that was chosen as a single -- I can see why...

The beat on the album`s title track "Bumpin`" features a sample that should be recognizable by most Hip Hop headz, that bein` Slick Rick`s "Children Story". On "Hotel, Motel" Dis `N` Dat flips their lil` version of that famous sayin`, watch ya` men ladies.....LoL, the Ol` School Hip Hop samplin`continues on "Yeah, Just Hit Me", this time around they sample "Planet Rock" for the song`s hook. The album closes with the mellow & chill`D out "Dis `N` Dat" which samples The Isley Brothers` "Groove With You"... 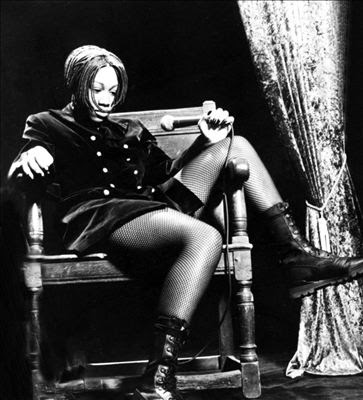 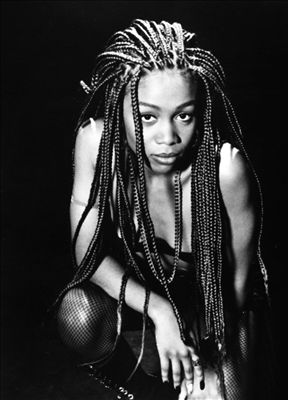 Overall even though it`s running time is just over a half hour the album`s a decent listen, if you`re a fan of Bass Music I`m sure that you`ll DiG this one. Sales~wise it was a failure in comparison to the likes of albums from the 69 Boyz, 95 South or even the Quad City DJ`s, but "Bumpin`" still has some overlooked gems within it so go `head & BuMP it.....LoL 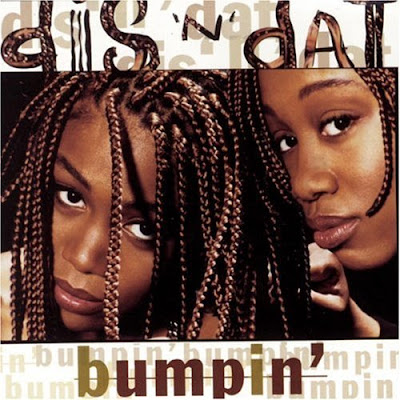 What`s happening y`all? Hope all you mothers & mothers to be out there had a great & Happy Mother`s Day! I should have posted up that 2Pac "Dear Mama" single today instead of when I did, it would`ve made more sense....LoL, oh well what`s been done is done I guess. Anyway what I have for y`all is a promo CD single by the Fugees that was released back in 1996. This joint was actually featured on the Soundtrack for "When We Were Kings". A documentary about "The Rumble In The Jungle", the 1974 heavyweight championship bout between Muhammad Ali & George Foreman which took place in Zaire...

You see boxing promoter Don King was out to get a rep` in the boxing world, to do so he offered both fighters 5 G`s each for a match against each other. King found a backer for the whole thing in Zaire`s dictator Mobutu Sese Suko & that`s how the event became known as "The Rumble In The Jungle", which is also the title of the promo single by the Fugees that I`m sharing with y`all. The song features A Tribe Called Quest, Busta Rhymes & John Forte as well. It`s actually the only Hip Hop track on the entire "When We Were Kings Soundtrack", so I guess that`s why there`s 3 versions of "Rumble In The Jungle" & then the rest of this promo single is quotes from Muhammad Ali which is kind of cool in it`s own right. So there ya have it a lil history behind the title of the song go on & check it out, it`s definitely worth a listen... 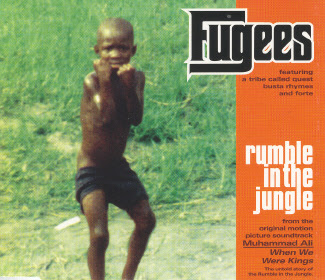 Today I have some more E-A-Ski for y`all listening pleasure. Sure it`s just a short lil` EP, but it`s pretty DoPe none~the~less. The production was of course handled by both E-A Ski & CMT. Out of the 7 tracks on here there`s actually only 4 songs, the remaining tracks are skits & interludes. The first track "Blast If I Have To" was also featured on the soundtrack to Ice Cube`s CLaSSiC 1995 film "Friday". What`s cool about this version though is that it has a lil` intro to it. In it these two kats plan on jackin` E-A-Ski for his Beamer ridin` on chrome, only thing is that Ski seen `em comin` & he turns the tables around on `em then the song starts...

The second track is a Radio version of "Blast If I Have To", what`s kind of DoPe is that it contains alternate lyrics so it`s not all censored out. I wish more artists would take this route for their Radio versions. The third track "The Interview" features radio vet` Billy Jam & it`s exactly just what it states, a quick 37 second interview. Ski`s pager goes off in the middle of it....LoL, Jam asks him where he`s from, 'East Side Oakland' is his response. Ski also let`s listeners know that he`s been doin` this Rap thang since 1983. The fourth track "When The Smoke Clears" is a nice G`d up joint backed by a thumpin` beat...

"West Coast Rebuttal" is more of an interlude. It`s a lil` funny to me, especially the lil` 'fuck ya` mama' intro to it....LoL, E-A-Ski`s on the "Fuck Ya` Mama Show" & the host asks him how he feels about the whole East Coast/ West Coast thing, he voices his opinion & rides for the West. "O.P.D." is a short skit, the cops pull over E-A-Ski (I`m guessin` it`s him) driving in a green BMW. The pigs are yellin` some racist ish while demanding him to get on the ground, then the skit ends. The final track "Same Ole Nigga" has E-A-Ski speakin` about the jealous haters & doubters...

My boy DiRTy KooL AiD hooked me up with this one so I need to thank him, however I found that the volume of all the tracks was just way too low so I had to adjust the volume on `em. Go `head & check it out, let me know if there`s any problems with the sound... 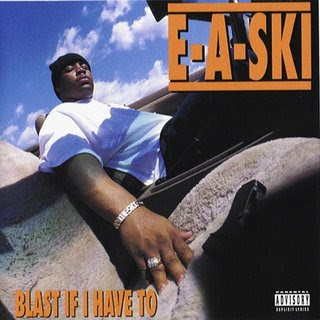 E-A-Ski - Blast If I Have To EP
Label: Priority Records
Released: 1995

Got a nice lil` 12 inch single by Al Tariq, some of y`all may know him as Fashion from his days as a member of The Beatnuts. He left the group shortly after they released their first album because he was lookin` to pursue a solo career. So in 1996 he dropped his solo debut album titled "God Connections" thru Correct Records. The 12 inch that I`m sharing with y`all was released a year later, but both songs on the single are from his debut album...

I believe that his former group The Beatnuts handled the production for these 2 songs, they even make a guest appearance on "Peace Akki". Both songs on this single are bangin`, but my favorite joint is "Think Not"....ya gotta love the beat on that track! The only thing that I`m not feelin` about this 12 inch is how they handle the radio versions of both songs, by simply but annoyingly editing them so the end result is 2 joints that you can`t really enjoy as a listener. In my ears it would just make more sense to rewrite the lyrics so there`s no cussin`, but that`s just my opinion of course....LoL, the dirty versions are the real gems on here so go `head & check `em out for ya`self... 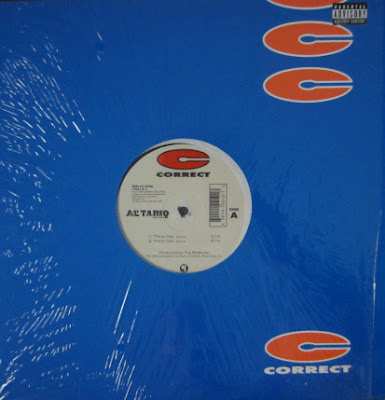 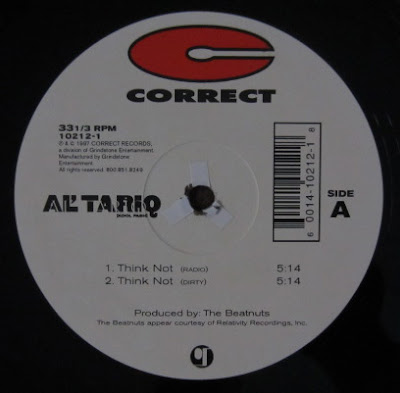 Here`s another joint off his solo album worth hearin`...