Got a lil` gem for y`all from UK Hip Hop pioneers Credit To The Nation featuring the Rhyme Animal Mr. Chuck D & they`re set to Ring The Alarm, just check the press release...

The comeback single from British Hip-Hop pioneers, Credit To The Nation, titled ‘RTA’, is out now. Available at digital retailers as a remix bundle, that includes a version featuring Chuck D of the legendary Public Enemy.

The new single is the first release in twelve years from the band, and has received positive reviews from media. With strong airplay support from XFM London, and BBC 6 Music, where it was recently featured on the ‘Roundtable’ segment of the 6 Music Steve Lamacq show.

Credit To The Nation made a name for themselves in the early nineties. Their debut album "Take Dis", birthed a selection of political hits and popular singles. These included ‘Teenage Sensation’, which reached #23 on the UK Singles Chart, 'Sowing The Seeds Of Hatred', and the breakthrough single, ‘Call It What You Want’, which sampled the guitar riff on Nirvana's ‘Smells Like Teen Spirit’, gained the band a following outside of the rap market, and also appeared on the soundtrack to the Jude Law movie Shopping.

Since then they toured with such artists as Manic Street Preachers, Therapy, and Chumbawamba, and played live at The Glastonbury NME stage, Phoenix Festival, and the Reading Festival Melody Maker Stage to name a few.

‘RTA’ is out now, on Crossflow Recordings... 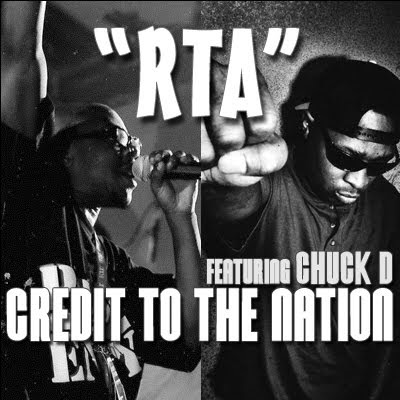 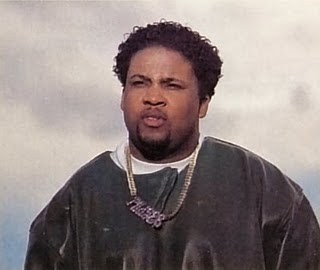 What`s poppin` y`all? Hope all is good, got some more gems for ya today. Now honestly there isn`t much info` out there on Pudgee Tha Phat Bastard, due to the shady music industry he has been pretty much been lost in the shadows. At one point in time he was rollin` with the Flavor Unit, he was also ghost~writing for the likes of Roxanne Shante & Fatal. However things really took off for Pudgee after he was introduced to Red Hot Lover Tone a.k.a. Tone, one half of the production duo Trackmasters or Trak Masterz as they were known back in 1993...

Working with the Trackmasters Pudgee was able to sign a deal with Giant Records to release his debut and only album "Give `Em The Finger". The album itself is pretty good, at least that`s my opinion....LoL, I`ll have to dig it up for y`all a lil` later so you could pass judgment ya`self. However due to label poli~trickS & a lack of promo the album didn`t fair too well sales~wise. So in an attempt to find a greener pasture Pudgee signed with Perspective Records around 1995...

Once again this choice proved to be another bad one on Pudgee`s part. The label was able to release about a handful of singles (one of them being Pudgee`s most recognized track the Original Version of "Think Big" featuring the late~great Notorious B.I.G. & Lord Tariq), but they failed to released his sophomore album "Niguz Fa Life". It`s sad to say but Pudgee Tha Phat Bastard never truly captured success as a soloist, however he does continue to stay active behind the scenes ghost~writing for various artists. It`s been rumored that he wrote roughly 6 songs for Left Eye`s "Supernova" album...

Well that`s about all I know of him, makes ya wonder if his "Niguz Fa Life" album actually exists in some record label`s vault. Speakin` about unreleased joints, let`s get to the gems I have for ya. First there`s the 4 track EP "Dead Silence", it features the track "Angel Dust" a tribute to the late~great 2Pac. I`m guessing that these tracks were put together some time around 1996. Then there`s the "King Of New York [Bootleg]", I`m thinkin` that it`s mainly tracks gathered from the 12 "`s that Perspective Records released. Regardless check `em out & enjoy, you`ll be glad you did. 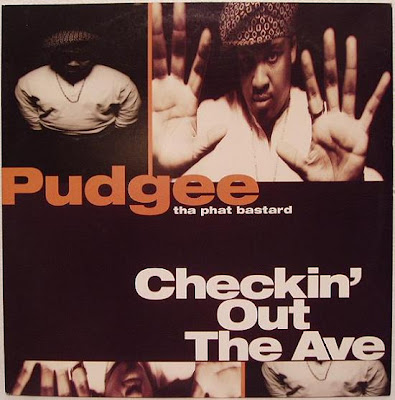 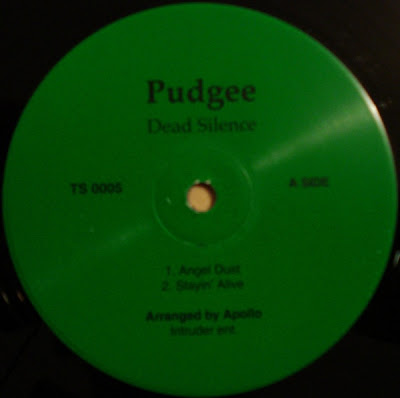 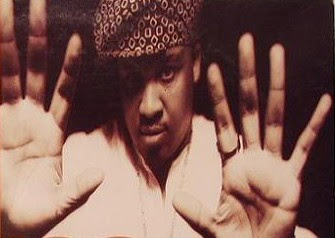 First off I need to thank Tom Caruana for putting together something that`s a breath of fresh air, especially when it comes to Mash~Ups. Honestly there`s been a whole lot of hot garbage dropped off in the Mash~Ups department. I`d almost have to say that I enjoyed this more than Danger Mouse`s Jay-Z Mash~Up the "Grey Album". What`s even more DoPe is that Tom didn`t only select the more popular Wu-Tang track vocals, but he also chose some of the lesser~known joints like Method Man`s "Uh Huh". That & the fact that the Beatles` influence on the beats isn`t so in ya` face & distracting that you forget that you`re listening to something that`s HiP HoP related. So there ya have it, I`ve dropped my thoughts. Go `head & check it out for ya`self, you`ll be glad ya did... 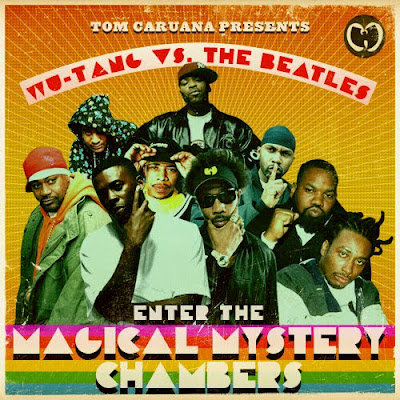 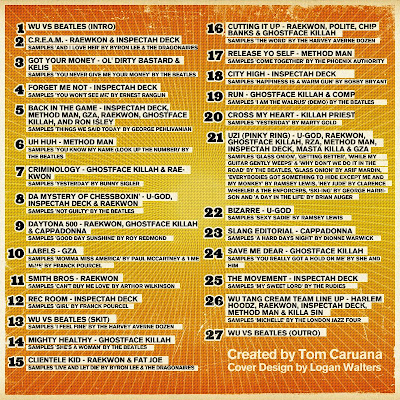 Been on the Total~tip lately.....LoL, so I`m sharing it with y`all. You should be a lil` familiar with the R&B group by now, if not get familiar!!! because I`m going to keep the story movin` from the previous Total post...

Comin` off a platinum debut, Total began to work on their 2nd album "Kima, Keisha & Pam". In the process they also lent their vocals to a gang of hit singles from Foxy Brown`s "I Can`t..." & LL Cool J`s "Loungin` [Rmx]" to Ma$e`s "Tell Me What You Want". They also contributed the single "What About Us?" featuring Missy Elliott to the "Soul Food Soundtrack", Pam even sang the hook on Biggie`s "Hypnotize". It`s safe to say that they were droppin` that fire when it came to the music...

Their "Kima, Keisha & Pam" album went gold & it`s first single "Trippin`", another collabo` with Missy Elliott, sold well enough to make it on the Top Ten Billboard Hot 100 Chart. Their second single "Sitting Home" didn`t do so well sales~wise so P. Diddy flexed his creative genius, gave the track some mouth~to~mouth & came up with a Remix that features Shyne & Total droppin` vocals over a Boogie Down Productions sample, I believe it`s "9mm". At the time the Remix was released there was a pretty BiG buzz surrounding Shyne, especially since he sounds like Biggie. Diddy also put together a Remix for "Trippin`" featuring DMX, the beat is pretty much just a re~arranged sample of LL Cool J`s "4, 3, 2, 1" - a track which DMX was also featured on...

It`s a DaMn shame, but Total only released 2 albums as a group. I`m not sure exactly why the group stopped working together, but there doesn`t seem to be any hopes for another Total album. However there is talk about Pam droppin` a solo album titled "Undeniable", you can check out her site. Around 2008 or so Kima did a track titled "What U Want?" with her sister, who is none other than the rapper Vita (think Murder Ink...."Vita-Vita-Vita"). Keisha went on to marry & build a family with actor Omar Epps...

So that`s pretty much it, I`ll get on to what I have for y`all -- another single. This time around it`s the CD Single for "Sitting Home", it features the Album Version & Remix featuring Shyne & also includes their Instrumentals & the "Trippin` [Rmx]" featuring DMX. So check it out & enjoy the tunes... 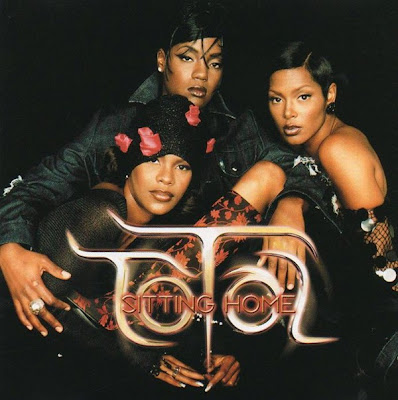 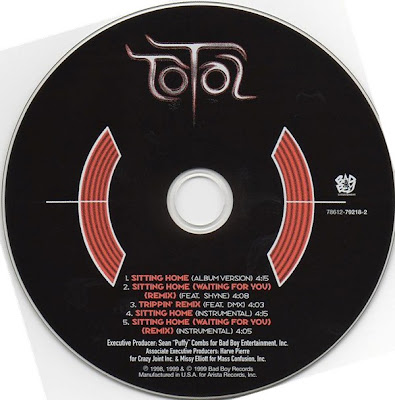 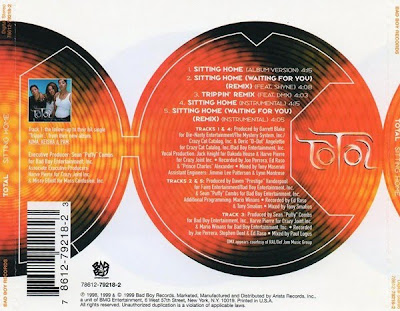 For the Total fans like myself, here`s a few of the tracks that Total helped brighten...

That`s right y`all, it`s been a long~long~long minute but I`m back! What I have today is a lil` different from the norm` here, but I`m sure you`ll enjoy it nonetheless. For those who may not be familiar with Total, here`s a lil` rundown for ya...

Members Kima, Keisha & Pam make up the R&B trio from New Jersey. They were signed to Puffy`s Bad Boy Entertainment/ Records label from roughly 1994 to 2000, making their first appearance on the late great Notorious B.I.G.`s debut single "Juicy", singing the hook. Impressed by their talents, Puffy decided to feature them on B.I.G.`s next single "One More Chance" (both the "Original Album Version" & the "Hip Hop Remix"). They hit the studio with Puff shortly after that to start working on their self~titled debut album...

"Can`t You See?" was their first single to SPaRK things off, featuring Biggie returning the favor of a guest verse. It reached the Top Ten on the R&B Charts, so Bad Boy capitalized on the buzz & "Total" their self~titled debut album was released shortly after. It`s been certified platinum; album sales~wise with 3 hit singles, 2 of them being Top Ten R&B Singles. "Kissing You", it`s "Remix" that features Puffy & "No One Else" along with it`s "Remix" that features Da Brat, Foxy Brown & Lil` Kim. I believe that the "No One Else [Rmx]" is the only track to feature both Kim & Foxy together, please correct me if I`m wrong!!!

Anyway, that`s all I`m gon` say about them for now. You`ll read a bit more in posts to come, now I`ll get to what I have for y`all. Fans of Total`s work should really DiG this because the Original Version of "Can`t You See?" featuring Biggie is included on this CD Single. Now when I say Original Version I mean that this track has all the cussin` that was left out of the version that appears on the 1994 self~titled album. This should be worth the DL alone, but you also get 3 Remixes featuring Keith Murray. So go `head & check it... 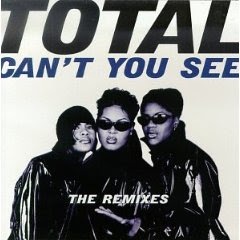 Here`s the video for "Kissing You"...


Here`s the video for "No One Else" featuring Da Brat...