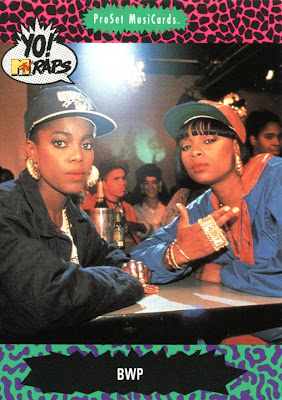 BWP...ah YeS the Bytches With Problems (Lyndah McCaskill & Tanisha Michele), a female rap group that debuted back in 1991 with their album titled "The Bytches" (they were also featured on No Face`s "Wake Your Daughter Up" album released in 1990 on the track titled "Half"). The group & their debut album was pretty much overlooked even though they dropped some controversial lyrics & were marketed as the female version of N.W.A., we`ll just call `em cousins of H.W.A. (another `90's HiP HoP female group). Personally though, I`d rank their debut LP at the top of the list for NaSTieST/ FiLTHieST Rap album dropped by any female/femaleS, even to this day.....LoL, what an achievement! It may not be platinum plaques, but hey it`s something... 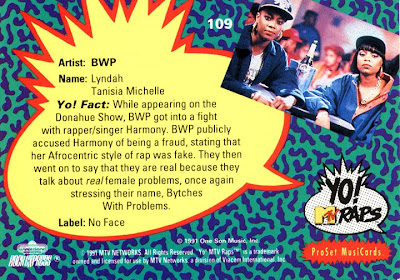 With Radio~ready tracks like "Cotex", a song that has BWP clownin` their boss who`s on her period. "Two Minute Brother" a few years ahead of Missy`s "One Minute Man", not as good of a track but hey they covered the subject matter first....LoL, then there`s "Is The Pussy Still Good?" some good ol` X~rated lyricS that would make 2 Live Crew smile. If ya didn`t catch the sarcasm about these trackS being Radio~ready I was joking (c`mon now:). Their NaSTiNeSS may have placed `em at the top of the list in that category/genre of Rap (for content at least), but it was also the main reason they were so overlooked -- especially at a time when Latifah was droppin` the "Nature Of A Sista`", empowering women with positive messages. Many felt that BWP was portraying shameless Black women stereotypes, but that`s not the case at least in my opinion they were just catering to that type of audience. Whether people want to believe it or not some folkS are livin` Life that way...

BWP`s "The Bytches" album has been out of print for sometime making this joint sort of a rarity now~a~dayS, lookin` online I`ve seen this joint go for about $40-$45 (used) or $170 (still packaged). I picked it up for myself about 5 yearS ago at a pawn shop for a mere Twonie (that`s a $2 coin for y`all non~CanadianS :) & some good ol` sales tax. I wouldn`t say this joint`s worth what folkS are asking for online, but if you`re a HiP HoP head like myself & like to collect them rare jointS then I guess it would be money well spent. Either way it`s here to check out before you fork out that hard earned Ca$h, so enjoy... 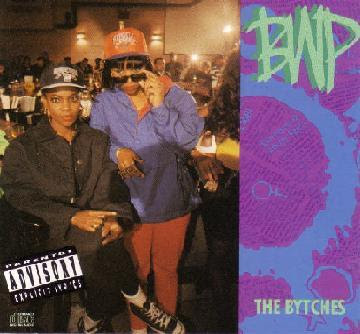 the voice behind the pen said...

this album popped in my head glad to see somebody had... big up

I tried to follow the link to listen to this album but the download didn't work. Is the file still up? I've been trying to find this album for a long time!

This is classic gangster rap of the 90's... Thank you

This is classic gangster rap of the 90's... Thank you

No problem, thanks for checkin` the BLoG!!!