Got some very iLL Hip Hop to share with y`all comin` courtesy of my homie Wyze Intellect. Sure he`s the one behind the bangin` beats on this project, but that`s besides the point the music really speaks for itself. He teamed up with SageInfinite, an emcee from New Jersey who knows how to flex them lyrics. Wyze Intellect reps Canada & provides the DoPe backdrops for `Infinite to spit his bars to. So what you`re gon` hear is what happens when the Can-Am connection (Canadian/ American in case ya couldn`t figure it out ) works well sonically & lyrically. The project is titled "Great Minds Think Alike" & was released December 7th, 2013 so y`all are getting it while it`s still hot & fresh out the studio.....LoL, One thing that my homie WiNGNuT mentioned while we were both giving this project a listen was that SageInfinite`s vocal tone kind of sounds a little like Mobb Deep`s Prodigy, I could see where he was going with that thought. Don`t get it twisted though y`all `Infinite`s style on the mic is much more lyrical in my opinion...


Now let`s get to the music shall we? The Intro is short & to the point, nothing super spectacular but it`s not wack either. "Let It Begin" is where the listener really gets to hear what their ears can expect from the rest of this project; a solid beat matched up with equally nice lyrics. On "Hunger" Sage speaks on just that, his hunger to strive & survive over a nice thumpin` backdrop. With it`s simplistic hook "Slap Boxing" is one of my favorite joints, even if it is a lil` on the short side. The braggdocio lyrics of "You Know My Style" mesh well with it`s mellow`D out hazy type beat. "What`s Ya` Life Worth?" has a deep thought provoking vibe to it, Wyze Intellect`s instrumental really compliments `Infinite`s rhymes tackling the subject of self worth...


Comin` again with some deep mental sparkin` lyrics on "The Puzzle", Sage let`s the listeners know that Life`s a Puzzle & that it`s definitely a struggle to make the pieces fit into their place. The iLL piano riffs on "Fear" backed by the thumpin` drums make for a nice head~noddin` piece. `Infinite speaks on the many fears of living Life, stuff that most heads ponder on but if they let it consume them they wouldn`t be able to live out their day to day lives. "Adrenaline" is a shorter song pumped full of lyrics that rep` that "high speed Life". The "Ghetto [Rmx]" opens up with some Joe Pesci samples from a movie that escapes my mind at the moment (it`s probably "Good Fellas"), anyway the aggressiveness of the beat provides a good foundation for Sage`s tough talkin` rhymes...


On "Welcome To My Universe" Sage invites the listeners on a journey into his state of mind while Wyze Intellect helps fuel the trip with his hypnotic instrumental. The beat on "Heat!" for some reason reminds me of playin` a good ol` school 8-bit NES video game like "Megaman" or something.....LoL, nostalgia indeed. `Infinite lets folks know on "Run" that he`s doin` it for the love of the art that Hip Hop is not just for the hype & lime light, he gets his point across with some DoPe lyrics on this one. The remix for "What`s Ya` Life Worth?" is pretty sweet, I`m not sure which beat I DiG more the original or this one. Both tracks are solid joints to peep that`s fo` sho`! "What The Game`s Missin`" has a grimy lil` backdrop to it while `Infinite spits it for Hip Hop. The closing track on this project is my favorite song, "As Time Goes By" has `Infinite speakin` on how the Hip Hop game has switched up & it`s occupants all pretty much cater to the 'Machine' (Industry) in order to gain their plaques...


In my opinion overall "Great Minds Think Alike" makes for a good solid listen, especially if your a fan of that underground Hip Hop sound. Both these kats compliment each other & work well together, one doesn`t out~shine the other. I am definitely lookin` forward to hearing another collabo` between these two that`s for sure. So go `head & hit up the bandcamp site, peep their tunes & if ya DiG the music get your free DL of the project for your listening pleasure... 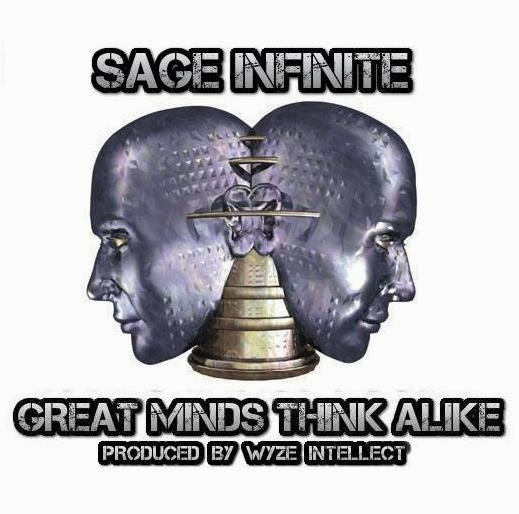 Today I`m hittin` y`all off with another HeRBaN DeLuXe VeRSioN, this time around I`ve decided to dust off the debut album from Canibus which dropped back in 1998 titled "Can-I-Bus". I know some of y`all are asking why?....LoL, especially after he straight up embarrassed himself by trying to battle Dizaster at KOTD that`s alright though. Honestly I will admit to being really disappointed when I first bought this album when it dropped. I mean after hearing Canibus rippin` the mixtape scene & pretty much every guest appearance that he had in 1997 I was kind of expecting some of that raw Hip Hop to show up on his debut, but upon my first listen I didn`t really hear it. The main problem with the album is that the production is kind of weak. I believe that Wyclef had just a lil` too much input on this album, from the beats he supplied to the directions that he decided to take the album. Sure Canibus has some co-production credit on the album, but it`s only on 4 of the 13 tracks (14 if you got the UK release). Both Wyclef & Jerry Wonder just really couldn`t provide the right backdrops to truly complement Canibus` lyrical style & I think that`s probably why a lot of folks dismiss this album as complete & utter shit...

Fifteen years after it`s release I decided to go back to it & give it another listen, this time with a little more of an open mind. Once you get passed the fact that the production is far from grade A the album really isn`t all that bad of a listen. Sure there are some weak moments, but overall "Can-I-Bus" still sounds better than a lot of the music that is being released now~a~days.....LoL, it`s truly Canibus` lyrics that save the album of course. Now let`s get into the album now shall we? The Intro is a lil` on the lame side with `Bis hackin` a computer deleting government files....LoL, luckily it`s only about 70 seconds long. The first actual song on the album "Patriots" is a collabo` with female emcee Free while Fugee member Pras handling the hook duty. Honestly I think that Free outshines `Bis on this song dropping lines like;

..."Specimen with extraterrestrial estrogen
Kick your intestines in, sell your testicles to Mexicans"...

After hearing Free`s verse it makes me ask the question, why didn`t she ever release a solo album? "Get Retarded" was a song that got a lot of play on the college Hip Hop radio shows back in `98. The Salaam Remi produced beat with the Roxanne Shante sample on the hook made it easy for Canibus to flex his lyrics. "Niggonometry" has a nice lil` funky vibe to it with a hook that`s scratched, Jerry Wonder didn`t do too bad with this one. The song itself is kind of like A Tribe Called Quest`s "What" except Canibus flips it more on the mathematical tip. Towards the end of the song there`s even a lil` swipe at LL Cool J....LoL...a sample of some guy says, "Hey I been sittin` here trying to think of what we can do with this here letter L..." Then they scratch in "F-U-C-K" & then the letter L follows & is echoed so it sounds like LL.....LoL, guess that was their way of easing the listeners into the LL Cool J DiSS track "2nd Round K.O." featuring former boxer Mike Tyson...

"2nd Round K.O." is probably the album`s best track, not because of the whole LL DiSS but more so because it`s a song that actually allows that battle hungry/ underground emcee to show his true colors over a beat that`s also one of the album`s better moments production~wise. "What`s Going On?" is an anti gun anthem that has `Bis askin` the knuckle~heads to leave the firearms at home when headin` out for the night. A song that speaks for most of the fans of Hip Hop, you know the ones that aren`t packin` heat but beats instead. Wyclef then decides to follow things up with "I Honor U", one of the album`s weaker moments. I say Wyclef because you can just tell that this joint is all his idea; from it`s lame uninspiring beat to it`s R&B styled hook. You can see that he was attempting to go for radio play with this one, talking about failed relationships from the female`s side of things -- the only problem is that the attempt isn`t all that well executed...

The hippy~vibed "Hype-Nitis" is an ode to Biz Markie`s CLaSSiC song "Vapors" that features Jenny Fujita singing the hook. "How We Roll" has Canibus rippin` his lyrics over a boom~bapp`N beat produced by Clark Kent while Panama P.I. takes on the duty of handling the hook. "Channel Zero" features an uncredited appearance from Mr. Cheeks of the Lost Boyz who can be heard delivering the song`s hook while Canibus spits UFO conspiracy influenced flows over another Clark Kent production. "Let`s Ride" is another one of the album`s weaker tracks, although the beat is pretty lame Canibus still manages to rap well over it. "Buckingham Palace" has Canibus delivering some quality lyrics over a moody~vibed beat, sure the hook`s a lil` simplistic but aside from that this joint is definitely a good listen. "Rip Rock" comes off as a lame attempt at sounding like Run DMC with it`s Rock-n-Roll influenced beat produced by Jerry Wonder, while `Bis sounds a lil` awkward flowin` over the instrumental. This is where the album would end if you had the US or Canadian versions, but if you got your hands on the UK release there`s actually a bonus track on there. The extra song in question is titled "How Come?" & it features Youssou N`Dour & Wyclef, it was originally featured as the third song on the "Bulworth Soundtrack"...

So that`s my thoughts on the original incarnation of the album, now let`s get to the 'bonus cuts' that I decided to add on to the album to give it a lil` extended play. The first song is the "Black Out Remix" of Yvette Michele`s joint "DJ Keep Playin`" featuring both Canibus & Black Rob. I`ve always dug that Yvette Michele song & how can ya go wrong with `Bis & Rob as features? It`s off a 12 inch single if you`re curious. "Group Home Family" was originally featured on the soundtrack to the 1997 film "Sprung", it`s a collabo` joint between Canibus, Panama P.I. & Mr. Cheeks. "Uni-4-Orm" is another collabo` that features Ras Kass, Canibus & Heltah Skeltah that was originally on the soundtrack to the 1996 Hip Hop documentary "Rhyme & Reason". "Seriously" is a Funkmaster Flex produced track that`s from the Flip Squad Allstar DJ`s album released back in 1998 featuring Boe & Villa, two kats who I have never heard of. The "4-3-2-1 Rmx" is off an LL Cool J 12 inch single for that song, figured that I would include the song that started the whole beef between `Bis & LL. I decided to follow that joint up with the original verse that Canibus spit for "4-3-2-1", just wish I had the entire song without any DJ adlibs. The last track on here is a live extended version of "2nd Round K.O." that Canibus performed while he was on Kiss FM London back in 1998. Gotta BiG~uP DJ Step One for that joint, much appreciated homie! Don`t wait any longer, go `head & give the album another listen you may just enjoy it this time around... 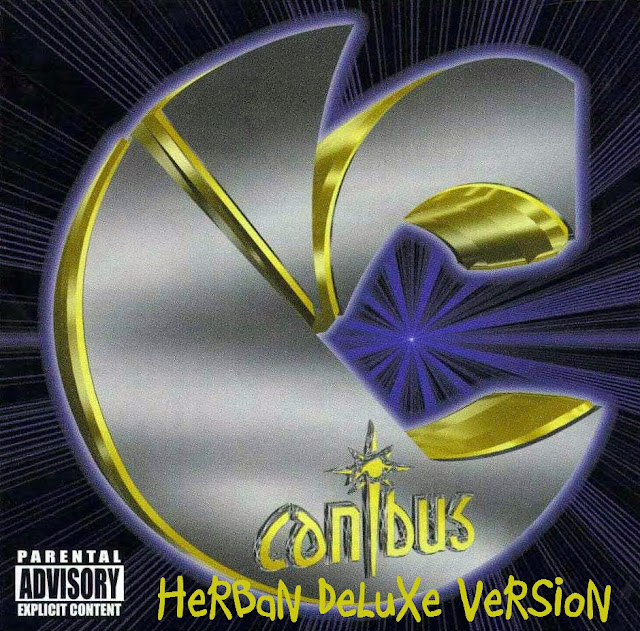